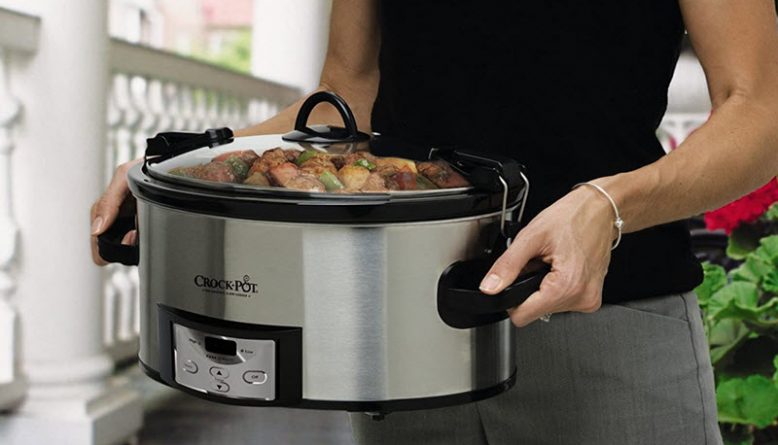 The Best CrockPot for ANY Size Needs!

What is a Crockpot?

A crockpot is a trademark that has been used to generally refer to slow cooker, or a kitchen appliance for cooking food at low temperature for a long period of time. The crockpot is powered by an A/C cord and comes with a lid. Since the food is heated at low temperature, it can be safely left unattended, thus, a highly useful tool for busy cooks. They also make great mother’s day gift ideas!

After preparing the ingredients needed, you only need to put them inside the crockpot and set the appropriate time and temperature setting (high or low). You can go to work, do about your other house chores, or run errands and after coming home, your meal is ready for serving.

Different crockpot units vary in design, size, and features. So choose one that is according to your needs and budget.

What's in this article...

In this article, I will be heavily focusing on a number of slow cooker units from the Crock-Pot® brand. A good thing to look for a crockpot unit is if it has a removable liner. In the products that I will be featuring, the main body of the crockpot is stainless, while the inside liner is a removable stoneware that can also be used as a beautiful serving dish.

The units differ in prices and your product preference will depend on your budget and cooking needs. So read on and see which suits you best. At the end of this article, I will also include tips on how to use a crockpot properly as well.

One feature of crockpots that makes it appealing to busy cooks is its capability of being set to cook for a specified time period. You can choose either high or low setting of temperature, with the high temperature resulting to faster cooking of course. So depending on how long you are staying outside the home, you may program the setting according to your desire.

And don’t forget, even though there is only one CrockPot, there are numerous slow cookers!

The cooking time of this crockpot can be programmed from 30 minutes to a maximum of 20 hours with 30-minute increments- pretty good maximum time for people who will be out of home for a longer period. One notable feature of this unit is its automatic keep warm system once the pre-set cooking time is reached. This allows the food to maintain the warm temperature until serving time without overcooking it.

The gasket lid and the handles at the sides allow easy portability. You can even bring the crockpot on picnics or potluck parties without having to transfer the food to another storage. Just like the best travel kettles.

The Crock-Pot SCCPVL610-S belongs to the highest ranked kitchen tools in Amazon and has been the Editor’s choice of Wired magazine. It has an average user rating of 4.4 out of 5 stars. Despite the high approval rating from many customers, there are also some complaints about the product’s undesirable plastic smell during cooking. One user noted that the smell goes away after the first cooking and works fine after that. 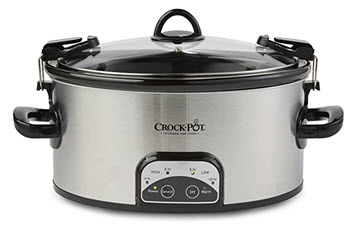 The Crock-Pot SCCPVL605-S is another notable unit with a rather high user rating. Aside from the usual removable stoneware and handles that can be similarly found in the previous crockpot I’ve featured, the unit can also be programmed automatically but with a less sophisticated configuration. The crockpot timer can only be rigidly programmed to 2, 4, 6, and 8 hours.

Although a bit inferior to the Crock-Pot SCCPVL610-S due to it’s inability to be set to odd numbers of cooking time, this may be a good choice for people with a lower budget.

The Crock-Pot SCCPVL605-S slow cooker got a higher rating of 4.8 out of 5 stars compared to the more popular SCCPVL610-S. It’s much simpler and less high-tech. Similarly, this product also got a complaint about emitting a plastic smell while cooking. One user surmised that it may be due to a manufacturing defect in some units (for the letters embossed at the bottom of the stoneware are not clearly stamped), thus giving off a plastic smell. The said user had asked for an exchange of the unit and is now satisfied with the replacement. 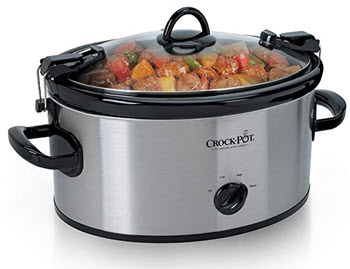 The Crock-Pot SCCPVL600S, unlike the first two products I’ve featured, is a manual slow cooker. Instead of a digital display is a rubber knob for adjusting the temperature. Since it is a manual unit, you have to adjust the knob manually when the desired cooking time is reached. The settings include high, low, and warm. Some users prefer this simplicity despite the absence of an automatic timer.

The cheapest in the list, this product is able to garner a 4.1 out of 5 stars. Many users are satisfied with its value for money. One user even wrote in the review that the unit works as well as a $100 slow cooker. The settings are simple, with the high really cooking fast, and the low really cooking slow. The warm setting is able to keep the food at the right temperature. One complaint regarding the design is the merely three-legged support of the pot, making it rather unstable.

How to Use a Crockpot

In this section, I will be listing down some pointers on crockpot cooking. Crockpot cooking is very convenient, especially if you’re always on the rush. Despite the short time span needed to attend to the cooking, you can still produce a delicious hearty meal that will satisfy your family’s cravings. This is one of those kitchen gadgets you really want to own!

If you are especially new to this type of cooking process, make sure that the food is well cooked. I highly suggest that you buy a book on this topic. It’s a great investment to take time to learn about crockpot cooking and it will definitely be worthwhile in the long run.

For a general idea on crockpot cooking, here are some guidelines: 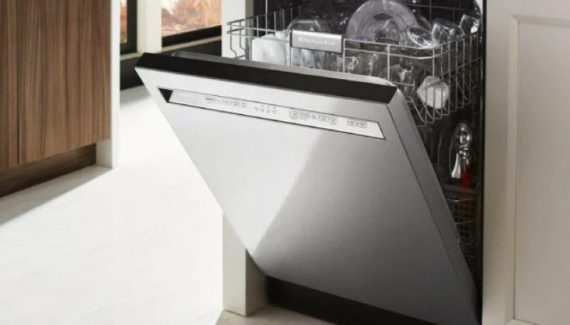 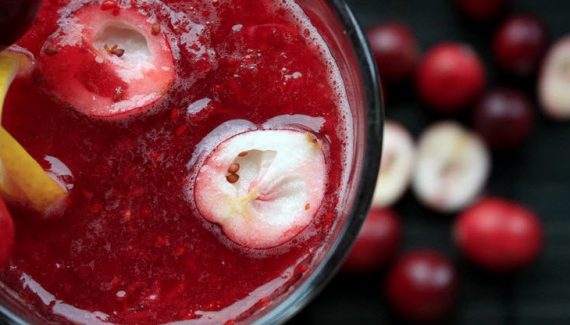