The Best Cast Iron Cookware for 2021

5 Pieces of  the Best Cast Iron Cookware that Your Kitchen Shouldn’t Be Without!

Cast iron cookware has been a favorite of cooks for many centuries. Searing and frying is ideal in cast iron cookware because of its ability to withstand and keep high cooking temperatures over a long period of time. Not only that, the best cast iron cookware is something you can pass down to your children and they can do the same. It lasts forever! That’s why a few cast iron cookware manufacturers offer 99 year warranties on their cookware. Something no other type of cookware could ever replicate.

What's in this article...

In this post I’ll review five of my favorite pieces that I just couldn’t cook without. And if you were to buy and own each of these 5 pieces, you really should need anything else.

Who wouldn’t want to cook like professional chef Emeril Lagasse? This square grill pan will let you do just that. This grill pan will give your chicken, fish, steak, and veggies with real restaurant-style grill stripes-without having to fire up your outdoor grill. The raised ridges on this pan do double duty here, too: not only do they create nice-looking grill stripes on your food, but they also hold meat up out of its own grease for low-fat cooking.

This grill pan comes with plenty of other nifty features, like a long handle with a hole in the end for easy hanging storage. It has a thick base, which makes the pan a little bit heavy, but it also provides excellent heat distribution and heat retention. The grill pan’s ridges are tapered, to create crisp-looking stripes and to help prevent sticking. Its size is perfect for cooking for two, or for small-batch cooking-for cooking more food at once, you may want to look into a larger grill pan, which will cost a bit more.

Like any cast-iron cookware, be sure to thoroughly season this grill pan before you use it. Users recommend spraying it with vegetable oil, then cooking it by itself over high heat until it smokes. If you properly care for your cast-iron grill pan, it will produce beautifully cooked food for years.

If you’ve ever cooked for a crowd, you know that large-sized cookware is important. This is the best cast-iron skillet for me due to it being a full 15 inches in diameter, which is a bit bigger than the usual 10.5- or 12-inch skillet. With a 15-inch skillet, you can cook up large batches of almost anything-chicken, vegetables, steak, paella, and you can even deep-fry foods that don’t require the oil to be too deep.

Want to cook smaller batches of two foods side-by-side? No problem, with this skillet! What about some authentic corn bread for a dinner party? This is the perfect cast-iron skillet for cooking for a crowd.

Another great feature of this cast-iron skillet is that you can use it indoors or outdoors-whip up a big batch of eggs for breakfast at home, or fry up some sausages for everyone on a family camping trip. Its size makes it a bit heavy-11 pounds-but that’s not unusual for cast-iron cookware. Make sure before purchasing it, though, that it will fit on your stovetop burners if you’re planning on using the pan indoors.

This skillet is pre-seasoned, like more and more cast-iron cookware out there. You may find that the pre-seasoning is adequate for what you’re cooking; if you’re going to be using it often, you might want to season it yourself, just to be sure. And don’t forget that you should never, ever use soap on cast-iron cookware, or you’ll wash the seasoning away and have to start over.

Did you know that you can cook almost anything in a wok that you can cook in a regular frying pan? Fried chicken, scrambled eggs, sauces. A wok is certainly a versatile piece of cookware. Of course, a wok is also perfect for cooking all kinds of Asian recipes. Woks are especially popular for stir-frying, but you can also make rice dishes, egg rolls, or dumplings in a wok, among a variety of other Asian dishes.

But don’t worry that Lodge is manufactured in South Pittsburg, Tennessee. Lodge might be American made, but it’s all Asian when it comes to their woks!

This wok has several features that make it particularly useful. First off, its flat bottom makes it extremely easy to use, so you can cook with it on an electric or gas range and it will stay steady. With a depth of 4.5 inches, it can handle a lot of food, making it perfect for family cooking. The cast-iron construction creates even heating along the wok’s bottom and up its sides, and ensures that the wok retains heat well. It also has large loop-style handles, for easy maneuvering.

Like a lot of other contemporary cast-iron products, this wok comes pre-seasoned with an exclusive vegetable-oil formula. It can take a little while to heat up, due to its heavy construction, but the benefits of cast-iron cooking are well worth the wait. This wok, being so large, is pretty heavy; be sure to handle it safely.

If you enjoy camping, then you know that dutch-oven cooking can’t be beat. Dutch ovens can be used to cook anything from stew to bacon to peach cobbler! The Camp Chef Dutch Oven comes in three sizes (measured in diameter): 10 inches, 12 inches, and 14 inches. It’s great for cooking for the whole campsite, as it can hold up to fourteen servings of food.

This dutch oven has some fun features. First, the lid has three little feet on it, so it doubles as a skillet-you’re really getting two products for the price of one. It’s made of 19 lbs. of cast iron, which may sound heavy, but it’s perfect for nestling into the coals of a campfire and providing even cooking for whatever you’re having for dinner, whether that’s chicken, potatoes, or your personal favorite camp food. The most entertaining feature, in my opinion, is its lid-it’s cast with a commemorative National Park design.

To clean this dutch oven, use only water and a scrub brush-no soap! Soap will ruin the seasoning, which will make food will stick to the inside of it and will make the iron rust. If you’re not much of a camper, this dutch oven can also be used in a conventional oven, but be careful when handling it-compared to other kitchen cookware, it’s quite heavy.

If you want to go for true top-of-the-line cast-iron cookware, Le Creuset is your best choice. Le Creuset offers a wide range of cast-iron items, including this crepe pan. This crepe pan is expensive, but if you’re experienced in crepe-making-or if you want to learn to be-then it’s well worth the price. This pan makes evenly cooked, delicious crepes that can be topped with either sweet or savory ingredients.

For a cast-iron pan, this crepe pan is practically a lightweight, weighing in at six pounds. It can be used on the stovetop or in the oven. Its outside features a colorful enamel that is resistant to chipping. This crepe pan, while specially designed for making crepes, can also be used for foods like omelets, quesadillas, and pancakes.

Be sure to follow the crepe pan’s included instructions to make sure your crepes don’t stick-a stuck-on crepe is just a mess. With a little practice, anyone can learn to use this cast-iron crepe pan for special family occasions.

Is the Best Cast Iron Cookware Hard to Care For?

Caring for your cast iron can sound a little intimidating. It’s not quite as simple as caring for your regular pots and pans. You do have to give it a little more thought.

Fortunately, not too much.

Rule number one is to clean it promptly, especially if you have acidic foods in there. These won’t harm it as such, but you will have to re-season your skillet if the acid sits for too long.

You also can’t let water sit in it for too long, for the rather obvious reason that cast iron rusts. Once again, this is not a complete disaster, as all you have to do is take some steel wool to scrub off the rust, then re-season your skillet.

That’s pretty much the only time you should use steel wool on cast iron, by the way.

Some people use salt to scrub their cast iron. It works quite well, but nothing really replaces soap and water. Just re-season as necessary.

It’s strongly recommended that you heat your cast iron skillet to dry it. A towel can do a pretty good job, but it will still leave some dampness which can lead to rust. It’s pretty easy to put the skillet back on the burner or oven still warm from cooking, and let the heat take care of the water.

Coat very lightly with a neutral cooking oil, and put away. 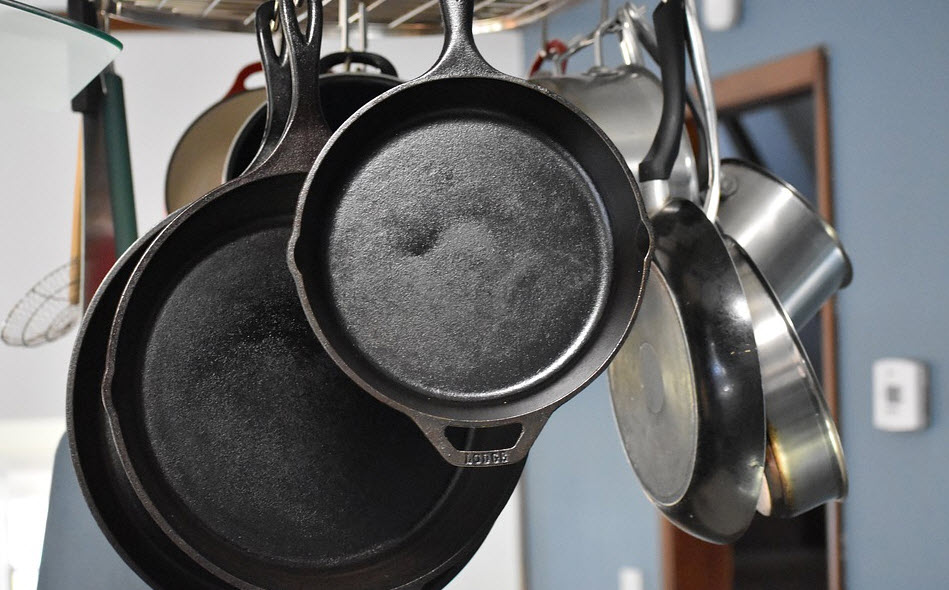 What’s So Great About Cooking with the Best Cast Iron Cookware?

I’ve already mentioned some benefits of cooking with cast iron, such as it not wearing out and that it adds a bit of iron to your diet. But there are more benefits.

You can get great cast iron skillets, cast iron dutch ovens and more from antique shops, or just buy them new. Either way you’re likely to get a great piece of cookware.

2. Cast iron can be used on the stove top or in the oven.

For some recipes, this is really handy. Start out browning your meat on the stove, then add more ingredients and put it in the oven. Very easy and it can save on cleanup.

Just be sure that you don’t buy any cast iron with parts that can’t go in the oven. Sometimes the handle type will limit you.

3. Cast iron can be beautiful.

Sure, it’s black if you buy the basic cast iron. There’s a certain appeal to that for some people, but if you don’t like it, go for enameled cast iron. Beautiful colors are available, and you still get some of the advantages of cooking with cast iron.

However, you will generally lose the advantage of getting more iron in your diet when you cook in enameled cast iron, since the iron will not actually come in contact with your food if the enamel is on the inside of the skillet as well as the outside. 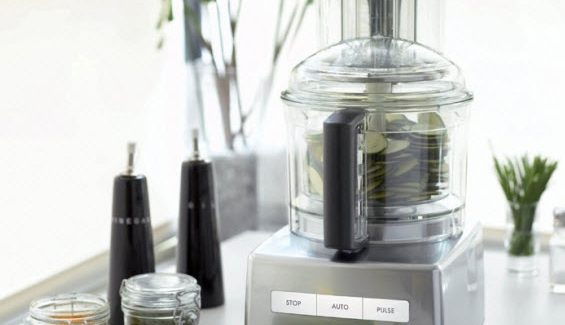 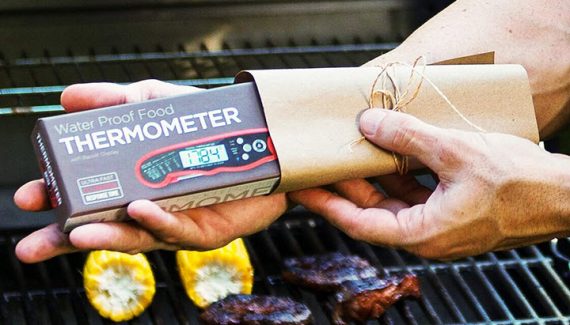